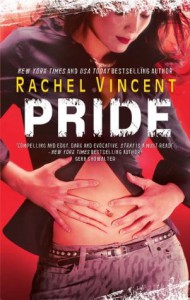 this book was the best one out of this series so far, i still think faythe needs to grow up bt she acting more like i woman instead of a child now and she's finally decided what she wants from marc, lets hope it stays that way even though he wont be there.

in this book faythe is in the middle of a tribunal, where they believe she's guilty until proven innocent.
the tribunal is made up of three alpha judges and some of them are corrupted and there going for faythes head.

also in "PRIDE" the tribunal comes across a pack of cannibal strays that are trying to create there own pride, these strays are chasing a tabby called kaci, faythe gets to her first. kaci is specially she has many secrets including what has happened to her family.

marc and faythe have finally decided what they want from each other, lets hope faythe dosnt screw it up while marcs not there - also the tribunal is gunning for marc, they want him out and they want faythes farther out of the way.

so there plenty of exciting things going on in this book, so i think you should have a read and find out for yourself how many stars you would rate it :)