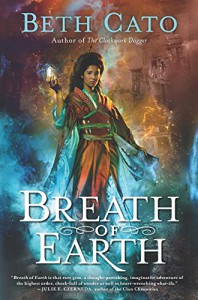 There is something strange going on with some of the writing in this book. It almost seems as though it was translated, but not super well. Who ever edited this book should have tried again before allowing it to be printed....
:/

There was also a big WTF moment around page 20, where the MC & her mentor/father-figure/boss are rolling around on the floor laughing hysterically and crying all because the MC pulled a funny face while playing their version of paper-scissors-rock! seriously?
I'm 25, same age as what-ever-her-name-is & I wouldn't find that to be overly amusing. I thought to myself 'hey maybe it's just her time period?' then thought about it again and Nope, It's definitely something someone under 10 would find hilarious (possibly younger) and not a grown ass adult no matter when the story is set.