The Girl With No Name - My Review 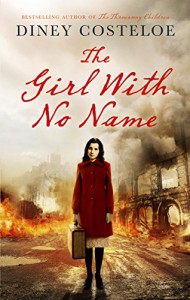 What a beautiful ending to a wonderful book. Thank goodness Harry seem to have disappeared from the picture - I wonder what happened to him?

It was horrifying to read about Mutti's condition at the end, to imagine anyone could survive such a thing let alone the hundreds of people who did is just.... insane. It really does seem like a work of fiction; heartbreaking and impossible to believe.

Lovely ending, poor girl after all her heartache she deserved such a joyful end.

All the characters were exceptionally well done, even the devious Harry who I'm fairly certain turned into a narcissistic psychopath fundamentally due to his horrible circumstances. Terrifying to imagine how many others out there who would have turned into similar beings.

Still the skill the author showed in this book, creating this story and these superb characters was incredible. The Girl With No Name also had a unique writing style, sort of third-person then scatterings of first-person POV, admittedly I was a little weirded out by it at the beginning but it really worked for the story, I don't believe it would have been told as well without it. I'll definitely be looking into more of her work.